Warts are caused by a virus that infects the top layer of the skin. The wart virus enters the skin through damaged areas like scrapes and cuts. The virus can spread to other parts of your body or to other people by touching the wart directly or by touching a towel, floor, or other object that also touched the wart.

Warts on the top of the foot are raised, rounded, and rough looking. 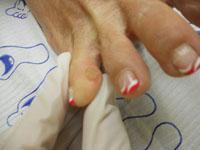 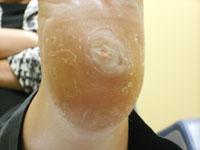 On the bottom of the foot, where the top layer of the skin is thicker, they appear flattened and are often speckled with black dots. Those dots look like seeds, but they are tiny blood vessels that feed the wart.

Warts can appear as a single unit or as many together side by side (mosaic wart). Warts can be painful to walk on or irritated by shoes.

Chemicals like salicylic acid, which causes the wart to peel away, and Cantharadin, which causes a blister to form between the wart and the skin, are the most common treatment methods.

Laser treatment has also been successful and cuts off the blood supply to the wart. When all else fails surgical excision of the wart is another option.

The successful treatment of warts can take many months. If you believe you might have a wart, fill out the appointment request form or call us today to schedule an appointment.